A Medal for the USA 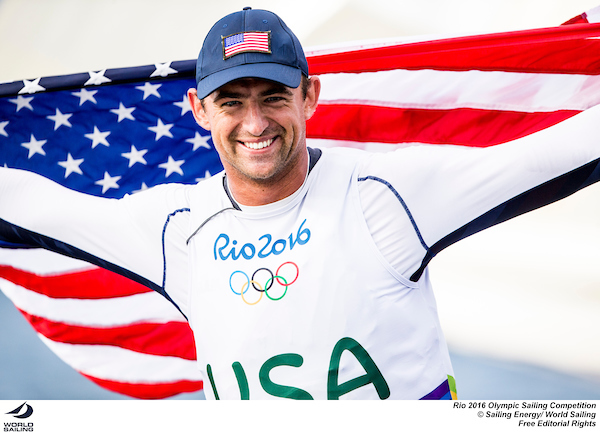 Caleb Paine had a difficult task ahead of him when he woke up this morning. He needed to put two boats between him and Croatia's Ivan Gašpić and beat Max Salminen from Sweden. The two Laser classes had already sailed on the Medal Course off Flamingo Beach that afternoon, and Paine, along with his coach Luther Carpenter, watched carefully. The sea breeze, blowing out of the south, had filled in at 10-12 knots. 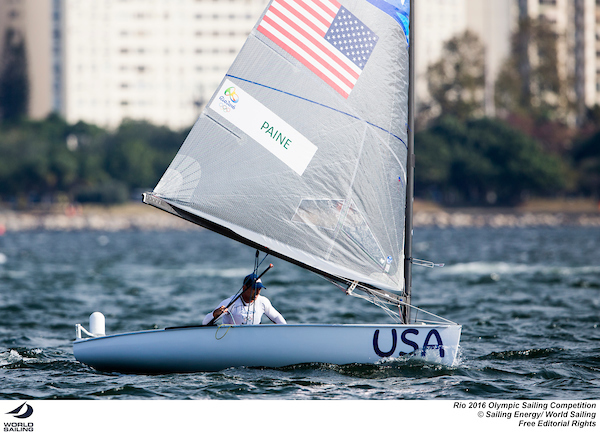 Paine started the five-leg, one-mile course in the middle of the starting line. Gašpić started on the far port end of the line. Early on in leg one, Paine sailed to the right side of the course, leaving the Croatian boat, and France alone on the other side of the course. It was a risky strategy, but then again, an Olympic Medal was on the line. This was no time for conservatism.

Adding to the intrigue, last week Gašpić protested Paine in Race 6 for crossing too close at the start. Paine was disqualified for violating Racing Rules of Sailing 10. It was a crushing set back for the 26-year sailor from San Diego. The next day his rules advisor, David Dellenbaugh, found some footage of the start shot by the Olympic Broadcast Service. The Jury agreed to reopen the case when they heard about the footage. The footage clearly showed that Paine had made it across with plenty of room to spare. The Jury dismissed the protest and awarded Paine his original second place finish in Race Six. As I watched the ten Finn's close in on the first turning mark today, I wondered if this incident was on the mind of either sailor?

About two-thirds of the way upwind, Paine tacked to starboard and appeared to be behind Gašpić and a few other boats, including France. The American tacked back to port to sail further to the right side. This pattern repeated itself three times. As Paine was nearing the lay line, a strong gust was filling in from his right. He sailed into the new wind and tacked over for the mark. Simultaneously, the wind on the left side caved. Just like that, Paine surged into the lead while Gašpić was now in seventh place. 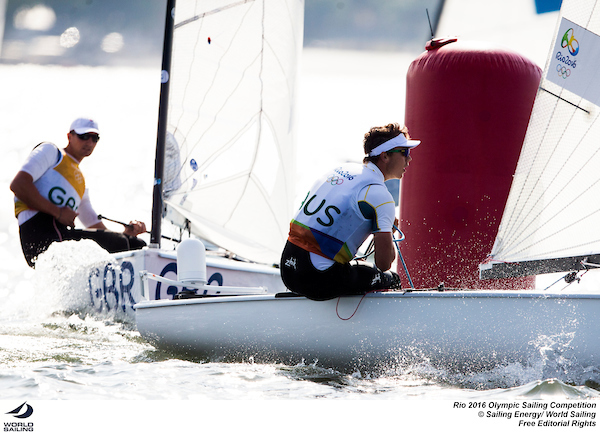 Paine rounded ahead of Jorge Zarif from Brazil, Australia’s Jake Lilley Giles Scott from Great Britain. Scott had already clinched the Gold Medal on points. The Race Committee flew an Oscar signal flag – “free pumping” – allowing the competitors to rock, ooch or pump at will. The aerobic drill was on.

The aerial footage, broadcast with tight, stabilized water angle views, gave us a perfect example of how to accelerate on each wave. Giles Scott's choreography was a thing of beauty. The British superstar has not lost a major regatta in the past four years, and has won the Finn Gold Cup for the World Championship three years in a row. Scott quickly sailed by France and Lilley. 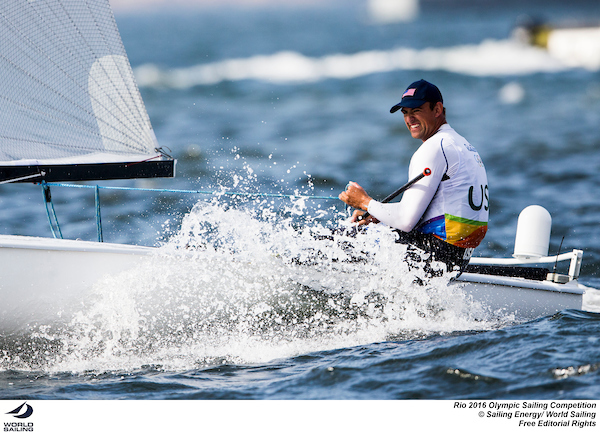 He closed the gap on Paine. At the leeward gate Paine, held a 31-second lead over Scott. Gašpić dropped back to 9th and Salminen rounded sixth. Three legs to go, and the breeze was increasing to 12 knots. Paine headed back to the right side of the course, and simply covered the fleet. It was textbook tactics.

At the next windward mark, Paine held on to his 31-second (seven boat length) lead over Scott. A full two minutes and 44 seconds later, Gašpić rounded the mark in last place. On this leg Scott seemed to coast. He must have been thinking about how special it was to be on the cusp of a Gold Medal. In the four previous Games, Ben Ainslie had won three Gold Medals, and before that in 2000 another British sailor, Iain Percy, had won a Gold in Sydney. That is an impressive run. Since the Finn was introduced to the Olympics in 1952, several American sailors have won medals including: John Marvin in 1956 (Bronze), National Sailing Hall of Famer Peter Barrett in 1964 (Silver), John Bertrand in 1984 (Silver), Brian Ledbetter in 1992 (Silver), and Zach Railey in 2008 (Silver).

At the fourth and final mark, Scott had gained on Paine. The two boats were 19 seconds apart. Paine headed up on a close reach and kept working. He never looked back. This was not Usain Bolt looking over at his competition. The French and Croatian sailors were still well behind. Caleb crossed the line 22:51 seconds after starting. His tactic of working the right side of the course worked, and he stayed strong to win the Medal Race. Ivan Gašpić finished last. Karma? 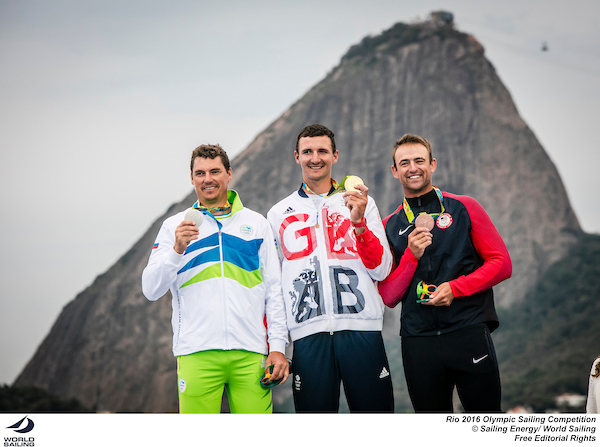 It was the first sailing medal for the USA since 2008. 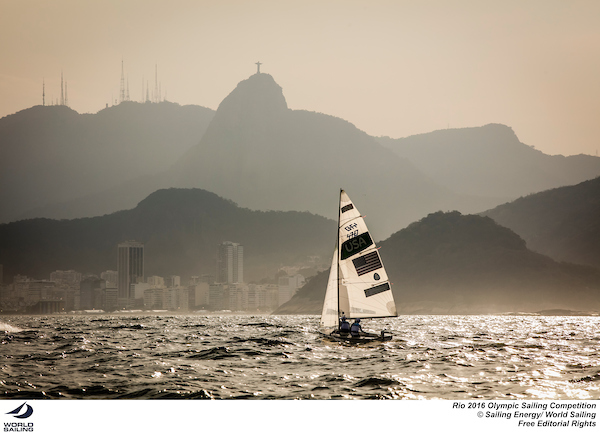 Tomorrow Annie Haeger and Briana Provancha have a strong change to medal in the Women's 470 Class. They stand in third place, just one point out of second, but only two points ahead of fifth. In the Men's 470, Stu McNay and Dave Hughes are sitting in fourth place, but are too far behind in points to break into Medal position. They opened with a first in the opening race today, but ended with an 11-14.


The Nacra 17s provided an unbelievable finish. Argentina's 54-year old skipper Santiago Lange and crew, Cecilia Saroli, fouled the British on the starting line. They rounded the first mark in last. On Leg Two they moved into sixth. The Argentine crew had to stay within three boats of Australia and two boats ahead of Austria. On the fourth leg Lange fouled Austria at the windward mark. He and Saroli had to take a 360-degree penalty turn. They were in fourth and lost two boats. Australia crossed the line in second. Austria followed in third and the Argentines finished sixth, good enough to win the Gold by just a single point. The Aussies nipped Austria on the tie-breaker because they finished ahead. It was one exciting finish. 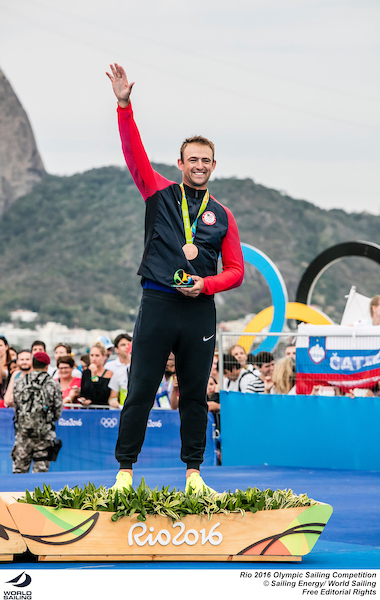