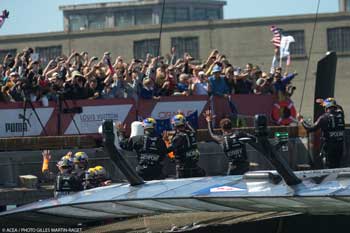 The 34th America's Cup defense has turned into more of a people show than a boat show. Sure, the boats are amazingly fast, technological marvels, but the emotional highs and lows that we are feeling while watching and listening to the sailors compete is the epitome of human drama. How could anyone write a script for such a compelling narrative?

Think about these story lines: The America's Cup has been won and lost by the most successful business leaders of their eras. This is the oldest continuously contested trophy in international sports, dating back to 1851. The score is tied at 8-8.

We are down to one, 30-minute race around a 10-mile course, off the city front of San Francisco. A tiny, sailing-crazed nation, with a home-grown crew, is up against one of the wealthiest men in the world, who has acquired the services of Olympic champions and superstars from seven nations. New Zealand has been one race from winning the Cup for a week, while Oracle Team USA has felt the pressure of being on the brink of defeat for seven races in a row. Tomorrow, one team will be heroes; the other will be hurting for a long time.

Today, on the 18th day of the Cup, we saw two very different races. In the first contest, the Australian skipper of the American boat, James Spithill, forced the New Zealanders into irons at the start. This is the equivalent of a football player fumbling the ball in his own end zone and the other team recovering it for a touchdown. USA 17 jumped to a comfortable lead. After the start, the boats seemed fairly even in speed in 15-18 knots of wind. With another American victory the score stood at 8-7, with ETNZ still leading the series. After the race, the Kiwi skipper, Dean Barker, sounded determined to get right back on the racecourse.

Race Two commenced on-schedule. At the start, both boats hit the line at the same time. USA 17 was to windward. Could they drive over the top of NZL? Barker was in the better inside position and luffed Spithill at the first turning mark. Downwind, USA 17 gained a length or two. There wasn't much difference in speed between the AC 72s. Both cats streaked down the course at 41 knots. About one-half mile from the leeward gate, USA 17 jibed. Inexplicably, NZL continued on. The leading boat should always cover by staying between the competitor and the next mark. The American boat was working to set up a split at the gate to sail on a different course than the Kiwis. Had NZL jibed with USA 17 they would have stayed in phase. Then USA 17 would have been forced to make two jibes to get the split. In contrast during previous races, OTUSA's tactician, Great Britain's Ben Ainslie, covered closely when they were ahead on Leg Two.

On the third leg to windward, USA 17 inched up under the lee of Alcatraz Island. I wonder if the prisoners in the 1930s would have been able to watch the Cup races had they taken place on the Bay at that time? NZL tacked over. They were crossing by about three lengths. NZL's tactician, Ray Davies, called for a tack ahead but to leeward of USA 17. At that moment, Spithill headed down a few degrees, got his boat foiling and sailed right over NZL. The Kiwis were stunned. When USA 17 tacked back into the center of course, NZL followed immediately. NZL could have extended a few more lengths and that might have helped them keep their wind clear. It is never tidy when a faster boat passes a slower boat. At that moment USA 17 took off and sailed away from NZL at an astonishing rate. It reminds me of the philosophy of boxer Mike Tyson, who said, "Every opponent has a plan until I punch them in the nose." The crew of Emirates Team New Zealand looked as if Tyson had landed one of his punishing left hooks. USA 17 crossed the line in triumph. The American team had tied the score at 8 to 8. 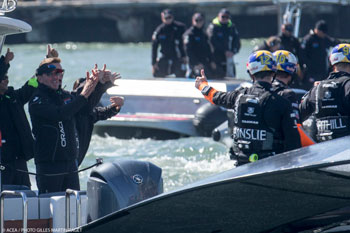 After the race, I think Jimmy Spithill was ready to sail the finale right then. His crew looked super-happy. Over on NZL it was total devastation. Neither Dean Barker, Ray Davies, or syndicate head Grant Dalton were up to doing a post-race interview from the boat. Their faces told the story. Their boat and crew were no longer the dominant team they were for the first eleven days of this historic match.

On August 28 I predicted in my AC Report # 5 that “Oracle Team USA would defend....barely.” Little did I know at the time that their wing trimmer would be disqualified from competition for illegally altering the team's AC 45s last year. Nor did I know that USA 17 would be so slow compared to New Zealand on the opening weekend. Nor did I realize how Oracle could make such a comeback. An old saying defined the American team, "When the going gets tough, the tough get going."

After each losing day, Jimmy Spithill would boldly declare, "We can win races." The press corps was incredulous. He made his statements with such over-the-top conviction that it made you wonder if maybe he was right. It reminds me of the great football quarterback Joe Namath's bold guarantee that the upstart American Football League, the New York Jets, would defeat the mighty Baltimore Colts. The Jets won 16-7. Namath has been a hero ever since.

Spithill must have known that his design team and shore crew had many experiments that might give the boat additional speed. The big secret around here is what did OTUSA do to improve their speed? I believe it is a combination of many little things. Eventually we will know. After every America's Cup, designers and engineers present papers on their research and innovations. I bet we’ll see volumes of material published over the next few years. The secret of the USA turnaround is the designers. 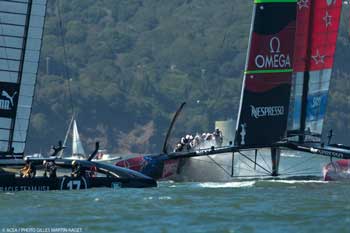 The America's Cup is not over. We have one more race. OTUSA has won ten times. They only have eight points because two were taken away for their rules infractions. New Zealand has won eight races, but was ahead in three other races that were abandoned for either too much wind, or too little. The weather let the Kiwis down just as they were close to securing their ninth victory. Mother nature can be cruel.

Sports are compelling because we can never really know the outcome. That is why these races are so much fun to watch. To be the only journalist commentating in the middle of racecourse is quite a privilege. I have never watched or sailed in such a hard-fought battle.

After the race today, I was talking with my co-commentator Todd Harris and our producer, Leon Sefton. My cell phone rang. On the other end of the line was Ted Turner. He was in Atlanta and has been watching all the races. He sounded excited and was very complementary about our television coverage. Ted is one of the greatest sailors of our time. He has won the America's Cup, was a four-time Yachtsman of the Year, is a member of the National Sailing Hall of Fame, and is one of the most successful television visionaries in the world. Ted, like so many other sailors and non-sailors alike, has been riveted by this America's Cup. I am sure he will be watching tomorrow.

Todd Harris, Ken Read and I will do our best to let the pictures play, and the words of the competitors tell the story as we describe the biggest sailboat race of this century. Tune in at 4pm ET (1 pm PT) to the NBC Sports Network.

Most everyone here in San Francisco believes Oracle Team USA has the America's Cup being re-bolted to its pedestal. If Oracle prevails they will complete an amazing turn around. If New Zealand finds a way to win, it will be an even bigger turn around. As the legendary Al Michaels once asked while calling a hockey game during the 1980 Winter Olympic Games, "Do you believe in miracles?" At this point it might take a miracle for the proud New Zealanders to win, but are you sure they won't? You better watch, because America's Cup history will be written tomorrow.