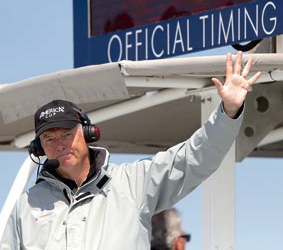 The sight of Emirates Team New Zealand teetering on its side was frightening. I’ll bet that the entire population of that small country held its collective breath at that moment. On the third leg of the ten-mile course in Race Eight of the America's Cup, the Kiwis lost control of their AC 72. During a routine tacking maneuver, about two boat lengths away from the American boat, the wing of NZL inverted. The boat dangerously heeled over at a 45-degree angle.

The Kiwi helmsman, Dean Barker, skillfully kept the boat from capsizing. The hydraulic system that controls the wing did not have enough power to shift the wing to the other side. The crew kept desperately grinding the winches to boost the hydraulic's power. It was close. I was watching just six boat lengths away aboard the race committee boat. All of us on board were stunned. Just as it looked like the boat was going to crash, the wing shifted, and the boat settled back down on both its hulls. In the process they fouled the USA. But that was least their problems. OTUSA sailed away for an easy win. Had the boat capsized, it would have been a complete disaster for the Kiwi team. Happily no one was hurt and they survived.

With this victory Oracle Team USA's score improves to zero after erasing a two-point deficit that the International Jury accessed for their unauthorized modifications to their AC 45s last year in the America's Cup World Series. One thing we learned today is that this America's Cup is far from over. OTUSA skipper James Spithill says his team is hungry and motivated to successfully defend. The American team needs to win nine more races, while New Zealand needs to win three.

Oracle Team USA is getting better, and the races are thrilling. We have now seen more passing in this Cup than any other America's Cup dating back to the first defense in 1870. The races have lasted anywhere from 22 to 32 minutes. Based on the scorecard in the first eight heats there are going to be more passes. We also have had more races in this Cup than any in the past. Twice there were seven races – 1983 and 2007.

A lay day on Friday was a huge benefit for the American squad. The sailors and the designers made a number of small changes to the boat that added up to a big improvement in speed. To my eye, they might have lost a little downwind speed, but more than made up for it with very impressive speed to windward. It makes me wonder if the Kiwis were a little rattled when they no longer had a windward speed advantage like we saw in the two races last Thursday.

The breeze today was strong, ranging from 17 to 21 knots in the first race. The ebb current pushed against the SW wind to create a nasty chop. In the past seven races the Kiwis always seemed to gain while tacking, but not today. The only noticeable difference aboard ETNZ was that their CEO, Grant Dalton, was not on board. He has been off the boat for both of their two loses, and on board for all of their six wins. I have a gut feeling Grant will be back on board for Sunday's two races.

Four-time Olympic champion Ben Ainslie was back as tactician on OTUSA. He made the correct tactical calls throughout the race. It does not look like the American tactician, John Kostecki, will be back on the crew. Ainslie and strategist Tom Slingsby have a constant dialog going. Keep in mind that both Slingsby and Ainslie have won Olympic Gold medals in singlehanded dinghy classes. I think they are enjoying the interplay. As tactician, Ainslie always makes the final call. Although a skipper can always overrule a tactician, Spithill seems comfortable with the new line up.

The intellectual battle between Ainslie and NZL tactician Ray Davies will be epic. If the speeds are as even as they now appear to be, the America's Cup could be decided on tactics.

The scene in San Francisco around the waterfront is vibrant. The crowds in the America's Cup village and on the water are big. OTUSA's leaders Larry Ellison and Russell Coutts had a bold vision. The event got off to a slow start, but clearly it is going well now. The best part is, that no one can really say with any certainty who is going to win. Sure, NZL is up on points, but the old adage that the team is going to take it one race at a time is Spithill's mantra. His crew believes they can do it. New Zealand cannot afford to make any more mistakes.

Dean Barker did win the first start, and easily won the second start of the late afternoon race. NZL held a three-boat length lead on Leg Three of the second race, but the race committee abandoned the race when the wind went over the 22.6-knot limit for five consecutive minutes. The comeback certainly gives the Kiwis some confidence going forward. Tomorrow the wind is forecasted to be a little lighter. The ebb current will also be less. NZL seems to be most competitive relative to OTUSA when the wind is 15-19 knots. At a post race press conference, Spithill said they have some more changes to make. Two races are scheduled for Sunday, while Monday is a scheduled lay day. The racing will continue again on Tuesday. Both teams can take some positive thoughts forward. If NZL can recover and win two races tomorrow they will be well on their way to reclaiming the Cup. If the USA wins two races, this series will be wide open.