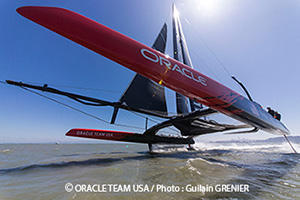 When I arrived at Pier 80 on the San Francisco waterfront for my day of sailing aboard Oracle Team USA's AC 72 catamaran, the first sailor I met was the tactician, John Kostecki. His first words got my attention, "When they give you the safety lesson, pay attention!" Later that morning I got the safety briefing that included how to wear the wet weather gear, use an oxygen tank, strap on a helmet, and know what to do in case of an unscheduled problem.

Luckily, for me anyway, the day went smoothly. Sailing on an AC 72 is an eye opener. I have been on many boats over the years including huge catamarans, tri-foilers, every America's Cup type yacht that exists, the speedy A Scows, windsurfers, kite boards, maxi ocean racers, 49ers, Moths and just about every major one design class. Very cool. But sailing on the AC 72 was a quantum leap beyond any other sailing I have done. These boats are really fast, exhilarating, at times scary, and yes, dangerous.

I think it is the first time in my career that I did not offer to steer. Being at the helm of an AC 72 is an intense job. The helmsman must be focused at every moment. Keeping the boat and the crew safe is a big responsibility. Jimmy Spithill is tasked with the job for the USA team. Kostecki told me that Spithill is fearless. For nearly five hours I watched the crew practice maneuvers, run speed tests, and sail four practice races. Even as a guest it was exhausting. The hulls are 46 feet apart. The eleven crew run from one side to the other on every maneuver. It takes four seconds to shift sides. Some crew pass in front of the 130 wing sail, and the others run behind it. At the training compound the crew does exercises on a trampoline to work on balance. I used a safety harness attached to a line stretched across the aft cross beam. It was a comforting piece of equipment. I spent my time totally drenched either in the middle of the beam dodging the spray, or tucked up under the windward hull next to Kostecki and strategist Tom Slingsby. It was fascinating listening to their conversation as they endlessly spun the grinder handles. Of the 11 crew, 8 grind a winch, 2 trim sails and 1 steers. Everyone is in constant motion. The boat feels big. The hulls are 72 feet long on the water line, and somewhere around 85 feet in over all length. The crew spends most of the time squatting in the cockpit of the windward hull to reduce windage. When they run across during maneuvers they literally slide on the trampoline for the last few feet just like a baseball players sliding into home plate.

I asked if anyone had fallen over during a turn. Kostecki sheepishly admitted that both he and Spithill have fallen in. They were quickly retrieved from a following chase boat, that includes a fully outfitted diver at the ready for any problem.

While sailing it was all business. Spithill speaks in a microphone and the crew reacts. Wing trimmer Dirk de Ridder and Spithill work the boat and wing with great precision in every puff of wind and through every wave. The most intense moment is bearing off at the windward mark. The AC 72 approaches the mark at 22 knots and quickly accelerates to 38 knots during the turn. The leeward hull lifts out of the water thanks to the wing foil at the bottom of the dagger board. Spithill has a series of knobs inside his steering wheel that he uses to adjust the angle of the wing. He actually took flying lessons to understand how wings create lift. The foils are analogous to wings on planes. Coordinating the use of the hydrodynamics of the foil and the aerodynamics of the is wing mainsail is a fascinating scientific exercise. At the bottom or foot of the wing there is a solid endplate that helps use the wind flowing over the sail for additional power. Both Oracle Team USA and Emirates Team New Zealand have spent considerable time developing their end plate systems. During our television broadcasts the aerial images will show just how the wing and the endplate generate power. I asked several questions about how the system works, but answers were not forthcoming. It is clear this is an area that could give one team an edge.

When the leeward hull is up on its foil two things happen: the first is the boat becomes remarkably stable, and the second is the sound of the water rushing past the hull disappears. At high speed the dagger board and foil did seem to vibrate at times. This was an issue that was discussed at length throughout the day with an engineer that was aboard from time to time. When the foil on the windward side of the hull hits the water there is a loud clap that sounds like thunder. It gave me an idea how big the loads are on the equipment. The fastest speed I witnessed that day was 41.2 knots. Most the time we sailed between 36 and 38 knots downwind, and somewhere between 20 and 22 knots upwind. On most tacks we passed through 90 degree angles. At these speeds San Francisco Bay seemed like a small body of water.

During the races Kostecki moved all over the boat to get a clear view of the race course, the current and the wind. A four knot gust of wind allowed the AC 72 to sail eight knots faster. While I was on board the true windspeed ranged from 14 knots in the morning to 21 knots later in the day. When the wind started gusting to 25 the practice session was called off for the rest of the day. For me, the five hour sail was exhausting and fascinating. I was mighty glad to head back to the dock but I now understand how powerful and exhilarating the AC 72 are for sailors and spectators alike.

All day long we passed close to ferry boats and small sailboats. I think Spithill likes to give fans a show. Cameras clicked and people cheered as we sped by. These boats are a compelling sight when you see them at close range sailing at speed. For me it was a rare treat to sail on an AC 72. I was a guest thanks to my job over the next two months commentating on the Louis Vuitton Cup and America's Cup for NBC.

During my time here in San Francisco I have spoken with many of the sailors. They all have a profound respect for each other knowing just how hard these boats are to sail. At this writing it is unclear which team will ultimately win the 34th America's Cup, but you can bet the winning crew will have earned it.